TSB: Rail made in 1953 a factor in CN derailment in Saskatchewan 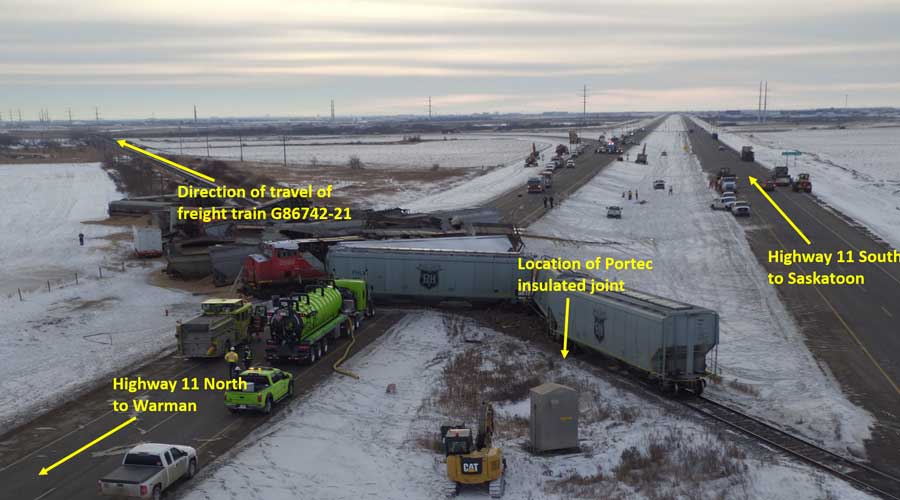 The Transportation Safety Board of Canada (TSB) identified a number of factors that led to a broken rail and derailment of a CN train in Saskatchewan in January 2019, the agency announced last week.

On Jan. 22, 2019, a CN freight train traveling south on the Warman subdivision experienced a rough ride as it crossed over the median between divided Highway 11. A minute later, a train-initiated emergency brake application occurred as 29 loaded grain cars and a mid-train locomotive derailed. Some of the grain cars released their loads, and the locomotive caught fire but was quickly extinguished.

No injuries occurred and no dangerous goods were involved, TSB officials said in a press release.

Investigators found that the rail head was missing at a joint between two pieces of rail, leaving a gap in the rail surface. As the head-end of the train traveled over the gap in the rail, the impact from the wheels further damaged the rail until it failed under the 27th car, resulting in the derailment, TSB officials said.

An analysis determined that the fracture that broke the rail likely initiated at a bolt hole. No cracks had been detected when the track was inspected ultrasonically less than a month earlier, suggesting that the crack had progressed from a non-detectable state to rail failure within weeks. Trains traveling through this track section passed from a well-supported track in the highway roadway onto less stiff track in the median, subjecting the rail to bending forces. Track cross-level and surface realignment progressively deteriorated, which increased the deflection of the rail and eventual failure.

In addition, it was discovered a damaged segment of track in the median had been recently repaired using rail manufactured in 1953, which had a lower fracture toughness. A bolt hole in the crack in the 1953 rail developed quickly, resulting in the broken rail.

The investigation revealed the risks associated with using rail made with lower fracture toughness to repair track sections that experience frequent bending forces. It was also determined that although CN's track information system recorded details of repairs made to the track, it did not provide sufficient resolution to assess the work conducted at individual joints where short pieces of rail were installed close together, as was the case in this occurrence.