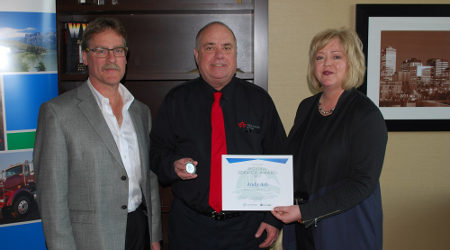 At an TRANSCAER® Awards ceremony held this week, the Railway Association of Canada (RAC) was recognized for advancing rail safety awareness and emergency response training.

RAC's Director of Dangerous Goods Andy Ash and transportation of dangerous goods specialists Jean-Pierre Couture and Curtis Myson each won Regional Service Awards for promoting and growing the TRANSCAER initiative in Ontario, Quebec and the Prairies, respectively, according to an RAC press release.

Ash, Couture and Myson form RAC's dangerous goods team, which has participated in more than 1,200 TRANSCAER sessions and trained some 20,000 participants since 1999.

"To be recognized by their colleagues and peers is a testament to the work that they do every day to ensure that these essential products are handled and transported safely," said RAC Acting President Gerald Gauthier.

The awards ceremony was held April 10 in Sherwood Park, Alberta.

TRANSCAER, which stands for Transportation Community Awareness and Emergency Response, is a voluntary national outreach effort that focuses on assisting communities to prepare for and respond to a possible hazardous materials transportation incident.