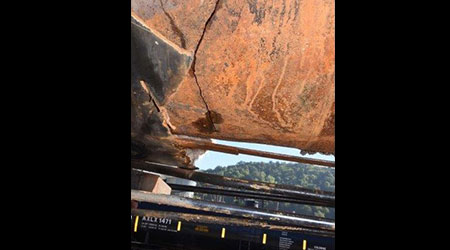 Eight people were injured in connection with the accident, in which 178,000 pounds of liquefied compressed chlorine was released over two-and-a-half hours after a DOT-105 tank car sustained a 42-inch crack in its tank shell. The crack occurred shortly after the car was loaded at the Axiall Corp. Natrium plant, according to an NTSB press release.

As a result of its investigation, the NTSB issued three new safety recommendations to the Pipeline and Hazardous Materials Safety Administration (PHMSA), and one each to the Association of American Railroads (AAR) and American Railcar Industries Inc. (ARI).

The agency wants the AAR to ensure local post-weld heat treatment processes are sufficiently monitored to avoid damage to tank-car materials. Inspection and maintenance procedures to address cracks in cradle pad weld attachments is the focus of the NTSB's recommendation to ARI.