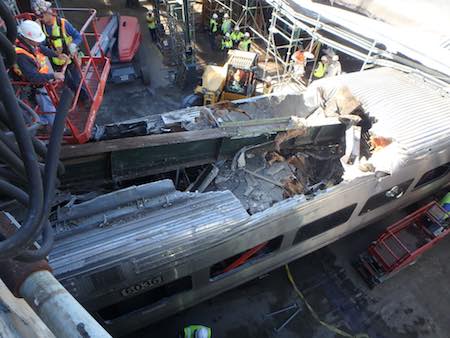 The brakes on the New Jersey Transit train that crashed into the Hoboken Terminal late last month were working properly, according to the National Transportation Safety Board's (NTSB) preliminary report on the fatal incident.

The train's brakes "functioned as designed" during a friction brake test using the rear locomotive to apply the brakes, NTSB officials said in the report, which was released yesterday.

One person died and 110 more were injured when the train failed to stop, overrode a bumping post and struck a wall of the terminal. The train was traveling more than twice the speed limit before it smashed into the station.

Although the cab car's electrical communication network needed for brake and propulsion control was destroyed in the accident, the friction brake test demonstrated that the brakes were in working order. Follow-up testing of several other key controlling components has been scheduled, NTSB officials said.

Investigators also found that NJ Transit's signal and train control system functioned as designed when the accident route was duplicated with signal alignment.

An NTSB drone was deployed to capture 109 aerial images of the accident scene, including the terminal's collapsed roof.

The NTSB's preliminary report provides factual information on the investigation; it doesn't contain analysis or state a probable cause. Additionally, the information in the report is subject to change as data is validated, NTSB officials said.