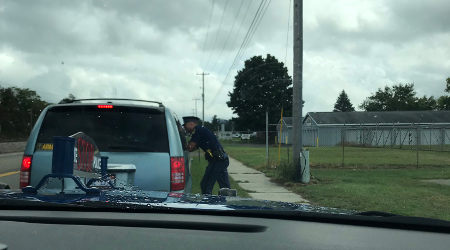 During the event, police reported to hundreds of grade crossings around the country deemed "high-incident" locations by the Federal Railroad Administration. Once onsite, law enforcement officials enforced grade crossing and trespassing laws during a three-hour safety detail, writing citations and warnings to violators, OLI officials said in a press release.

The event involves more than 500 police or sheriff's departments across 48 states. OLI also created more than 250,000 rail safety public awareness cards for distribution to motorists and pedestrians during the event.

The operation took place during Rail Safety Week, which this year is being jointly observed in the United States and Canada.

Every year, about 2,000 people are killed or injured in grade crossing and trespassing incidents across the United States, according to OLI.

MacMillan has served as a community services officer with CN since 2004. He first began volunteering with Operation Lifesaver in the 1970s while serving with the British Columbia Railway Police. At the time, MacMillan was responsible for presentations and other outreach efforts to schools and youth groups in Prince George, North Vancouver, and elsewhere in the region.

When he joined CN, he began overseeing public rail safety education and outreach for all of British Columbia.

"I've witnessed how quickly and effectively Bart gets his rail safety message across – whether he's speaking with children or adults," said Sarah Mayes, national director of Operation Lifesaver Canada. "After his four decades of dedicated rail safety promotion, this national recognition of Bart's efforts is so well deserved."

MacMillan will receive the award at a ceremony next month.