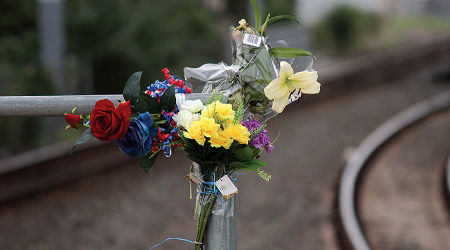 OLI is running a campaigned called #StopTrackTragedies, which features seven videos that tell the personal stories of people affected by rail crossing or trespassing incidents. The videos will feature victims, their friends and family members, as well as locomotive engineers and first responders, OLI officials said in a news release.

Each day this week, OLI will release a new video through social media. The full campaign can be viewed at stoptracktragedies.ca and oli.org.

Canada held its annual Rail Safety Week in April for more than 15 years, while the United States held its first Rail Safety Week in September 2017. Aligning the event in both countries will enable a "more coordinated and impactful" North American rail-safety campaign, OLI officials said.

Each year, 2,100 North Americans are killed or seriously injured due to unsafe behavior around tracks and trains, according to OLI.

"Our goal with #StopTrackTragedies is to drive home the message that an unsafe decision made in a split second – whether it's to go around a lowered gate at a rail crossing, or to trespass on the tracks — can have devastating consequences for you, your loved ones and members of your community," said Sarah Mayes, national director of Operation Lifesaver Canada.

Meanwhile, railroads and transportation agencies have announced plans to participate in Rail Safety Week. The Michigan Department of Transportation, for example, today is holding an event with CN, CSX, OLI and the Michigan Railroads Association.

In addition, Metra will join forces with local and federal agencies for educational events at its stations and enforcement activities at various rail crossings. In 2017, there were more than 100 rail crossing collisions involving motor vehicles in Illinois, Metra officials noted in a press release.

For its part, Union Pacific Railroad has partnered with global nonprofit organization Safe Kids Worldwide to launch the Start Safe Travel program, which is aimed at teaching parents and educators the safest ways to transport children and prevent railroad-related injuries.

One feature of the program will be the unveiling of a new children's rail-safety book titled Clifford and the Railroad Crossing, according to a Safe Kids Worldwide press release.

This year's Rail Safety Week will wrap up Sept. 29.