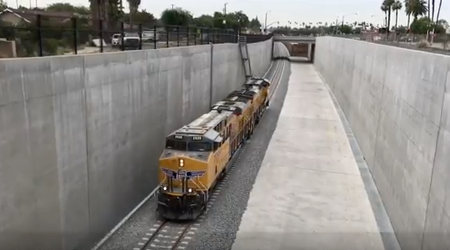 Alameda Corridor-East Construction Authority (ACE) representatives and other civic and private-sector officials gathered earlier this week to mark the opening of train service in a newly built trench in San Gabriel, California.

Construction began on the $313 million project in 2012 and final completion is scheduled for early next year.

"The San Gabriel trench is the largest project we have undertaken," said ACE Chairman and San Gabriel Mayor Juli Costanzo in a press release. "Opening it to rail traffic is the most significant project milestone and a cause for celebration."

Located on the transcontinental Alameda Corridor-East Trade Corridor, the 1.4-mile trench was designed to eliminate crossing congestion, collisions and horn noise from trains carrying goods to and from the San Pedro ports. The trench also was designed to help reduce vehicle emissions from idling cars and trucks.

The project received a $237.7 million construction allocation from California's Trade Corridors Improvement Fund (TCIF), placing it among the top three of 98 high-priority rail, port and roadway projects across the state that were funded by the trade corridors program, ACE officials said.

"The benefits of this project to California's economy, environment and quality of life highlight the importance of ongoing revenue for trade corridor projects," Inman said. "Thankfully, the recently enacted Senate Bill 1 Road Repair and Accountability Act provides ongoing revenue so that projects such as this will continue to be built."