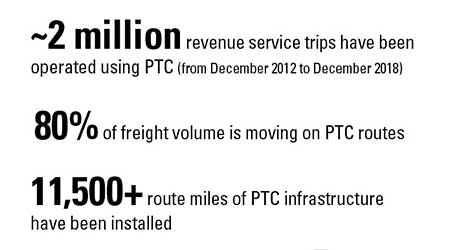 All 41 railroads either met the end-of-2018 statutory deadline for full implementation or submitted requests for an extension up to two additional years by demonstrating they met or exceeded certain criteria for an alternative schedule, such as by installing all wayside systems and training all employees, the status report shows.

As of Dec. 31, 2018, the following four railroads had implemented PTC systems on their required mainlines: the North County Transit District, Port Authority Trans-Hudson Corp., Portland & Western Railroad and Southern California Regional Railroad Authority (Metrolink). All other railroads subject to the mandate satisfied the six statutory criteria necessary to qualify for an extension, FRA officials said in a press release.

As of Dec. 31, 33 railroads had submitted a written notification formally requesting the FRA's review and approval of an alternative schedule and sequence, and as of Feb. 11, 25 of the requests had been approved.

"PTC is the most significant and complex infrastructure investment America's railroads have ever undertaken," said FRA Administrator Ronald Batory. "FRA will continue to work with a sense of urgency to ensure all railroads, particularly commuter railroads, remain focused and vigilant in satisfying key deadlines ahead."

The report also shows that as of 2018's end, host railroads' operations are governed by a PTC system on 83 percent of all freight railroad route miles subject to the mandate, and 30 percent of the required passenger railroad route miles. The FRA has conditionally certified 12 host railroads' PTC systems, based on their safety plans, and two safety plans are under review. Twenty-three additional plans must be submitted by June 2020.