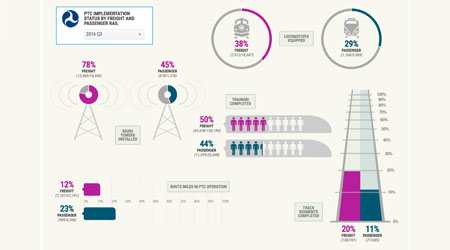 The Federal Railroad Administration's (FRA) latest report on the status of positive train control (PTC) implementation shows "uneven progress" across the country and railroads toward activating the safety technology, the agency announced yesterday.

The most measurable progress made by passenger railroads has been predominantly on the West Coast, while East Coast railroads — other than Amtrak and the Southeastern Pennsylvania Transportation Authority (SEPTA) — have been relatively stagnant, FRA officials said.

Railroads have until Dec. 31, 2018 to implement PTC. Extensions are available under some circumstances until 2020's end.

The FRA provided this link to view each railroad's PTC status.

In response to the FRA's latest status update, the Association of American Railroads (AAR) issued a statement noting that the report underscores the complexities of developing, installing and testing PTC technology. Implementing PTC on 60,000 miles of freight-rail track remains a priority, with Class Is "remaining on track at having PTC fully installed by the deadline," said AAR's statement.

"To this point, the freight-rail industry has invested more than $7.1 billion on this complex technology, spending $100 million a month on continuous development, testing and installation, with final costs expected to reach about $10.6 billion by the time it is fully operational," AAR said.