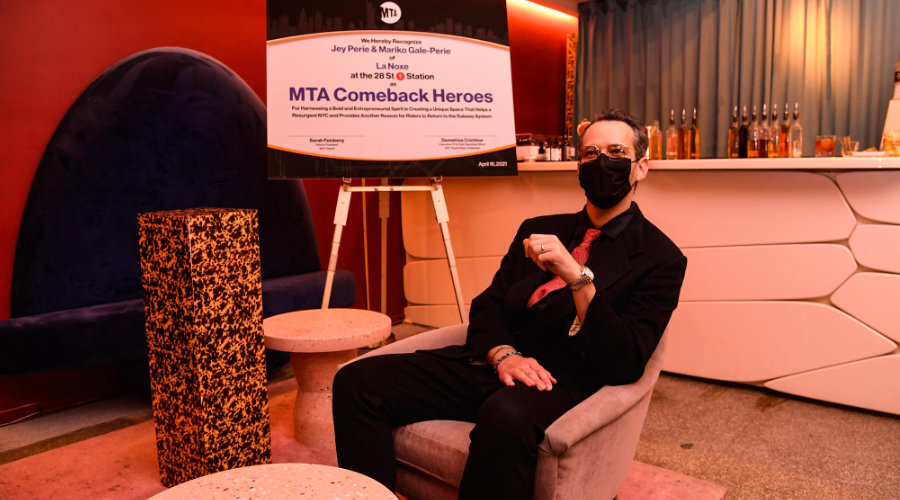 MTA New York City Transit (NYCT) is honoring what it calls "Comeback Heroes" from neighborhoods throughout its rail and bus network for creating "unique spaces" that help New York City provide another reason for riders to return to the subways and MTA system.

The first honorees are Jey Perie and Mariko Gale-Perie who own a bar in Chelsea called La Noxe. The Peries were chosen because of the positive attention their  business has brought to the subway system, inspiring New Yorkers to take the train, according to a news release.

The bar, which received its liquor license on the same day shelter-in-place orders were announced for New York City last year, is located at the bottom of the first flight of stairs at the southeast corner of the 28th Street Station and reports to have more than a thousand people on its waiting list. It occupies space in a private building and uses an easement for direct access to the unpaid side of the subway station.

“We’re proud to honor bold and creative New Yorkers like Jey and Mariko during this critical moment for the City,” said Sarah Feinberg, interim president of MTA NYCT. "That a destination bar like La Noxe can thrive in a stairwell to a subway station proves that the transit system remains vital as ever to the fabric of New York – and that we’ll be the engine that powers our economic recovery."

The subway system recently surpassed a ridership milestone on April 8, serving more than 2 million customers for the first time since the onset of the COVID-19 pandemic.