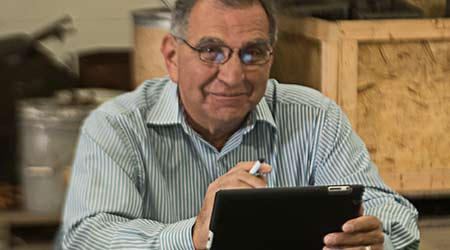 Neil Ferrone, who in October 2018 retired from Conrail as chief risk officer, died Jan. 29 at his Medford, New Jersey, home. He was 62.

Ferrone worked for Conrail for 42 years. When he retired, he had been in charge of safety, security, government reporting, environmental issues, hazardous materials, transportation compliance and new-hire transportation training. The hallmark of his success was taking on numerous responsibilities and issues, and managing them with passion, Conrail officials said in an email.

"Those who knew him over the years have many different stories to tell. There is a common thread that holds them together: Neil was always there to give assistance, advice and a helping hand when it was needed most," they said. "He was an anomaly of a railroader and a man. He always placed his family, company, employees and fellow railroaders before himself."

"Conrail and the railroad industry were lucky to have had such a leader in its ranks," they added.

Ferrone began his career in 1974 on the Central Railroad of New Jersey as a trackman. When the railroad was merged into Conrail in 1976, he became a track supervisor in the North Bergen, New Jersey, area.

In 1984, he found his true calling as a railroad safety professional when he was moved to the safety department, Conrail officials said.

"Neil worked tirelessly with both the managers and union leaders on the tie gangs to create a safer environment and work processes. He succeeded in his new safety role because he valued the workers and not numbers on a board," they said.

Ferrone later became the head regional safety manager in Conrail's Dearborn Division. When Conrail was split in 1999, he assumed the role of director of environmental and safety.

After the terrorist attacks on Sept. 11, 2001, Ferrone took on the additional responsibilities of head of Conrail's security. He was appointed to the Association of American Railroads' security committee as a full voting member and proved to be an expert on multiagency cooperation, Conrail officials said.

"His partnership with the Department of Homeland Security and Transportation Security Administration made him a subject matter expert on infrastructure security and emergency plans," they said.

Ferrone possessed a deep passion for his work, said Conrail President and Chief Operating Officer Tim Tierney in an email.

"His legacy will be the impact that his passion and dedication to safety left on Conrail, the rail industry and all the people he worked with during his 45-year career," Tierney wrote. "He will be truly missed."

Ferrone is survived by his wife Judy and two children. The family asks that memorials be made to the American Cancer Society.