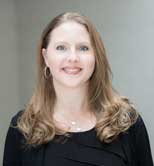 Celia Ann Pfleckl landed her job at Amtrak after spending nearly a decade in environmental consulting. Currently a senior sustainability manager for the national intercity passenger railroad, Pfleckl began her career at a firm now known as AMEC Foster Wheeler, where she consulted for several rail clients, including Conrail, CSX Transportation and Amtrak.

Pfleckl worked in AMEC’s Nashville office for about three years until a move to Washington, D.C., led her to transfer to the company’s Chantilly, Va., location in 2004.

At the time, that office didn’t have an environmental consulting practice, but Pfleckl made a business case to build one. Spearheading it meant growing and developing a new team, an experience Pfleckl describes as “an amazing opportunity” early in her career. When she moved into her current job at Amtrak in 2009, she further honed those team-building skills.

“In both my capacity as a consultant and also as a railroad employee, it has been satisfying to be able to work on a variety of environmental projects and see the positive impact of my results firsthand,” she says.

She now leads a team focused on advancing the railroad’s environmental practices and initiatives, along with familiarizing her colleagues on the general concept of sustainability.

“Celia’s collaborative and innovative thinking has truly changed the way that we do business at Amtrak, and she has worked to integrate sustainability into our operations,” wrote Joanne Maxwell, Amtrak’s senior manager of environment and sustainability, in her Rising Stars nomination for Pfleckl.

Pfleckl initiated and carried out Amtrak’s first greenhouse gas inventory in 2010, which the railroad now reports annually through the Carbon Disclosure Project, a global program that gathers carbon emissions data from about 5,000 companies. With Pfleckl at the helm of sustainability initiatives, Amtrak’s climate disclosure score has continued to improve, Maxwell added.

For Pfleckl, leadership and teamwork go hand-in-hand. A group, and not an individual, developed Amtrak’s sustainability policy, she says.

“We know we have a long way to go, but I feel like we have made some good progress over the past couple of years,” she adds.

In 2001, Pfleckl earned masters degrees in chemical engineering and management of technology from Vanderbilt University. She received a Bachelor of Science degree in chemistry from Sewanee in 1997.

Pfleckl also strives to make time for herself. During her college years, she worked as an instructor for hip-hop and jazz dance — something she hopes to get back into once her two children are a little older, she says.

Her advice to the influx of new railroaders in the industry? “Bring fresh ideas, but be willing to listen and understand the current culture.”