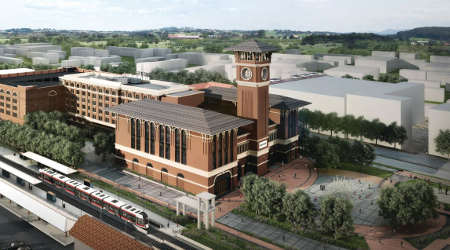 Known as "Grapevine Main," the TOD will consist of a 38,000-square-foot outdoor plaza next to a 42,000-square-foot rail station, as well as a 121-room boutique hotel and 552-space parking garage.

The rail station will feature modern amenities, meeting spaces, offices, community event space and a market, according to a press release issued by the Grapevine Convention and Visitors Bureau.

The bureau will operate the visitor information center, observation tower and outdoor plaza at Grapevine Main.

The 27-mile TEXRail commuter-rail line is slated to begin serving passengers in December 2018. The line will connect Grapevine to the Dallas/Fort Worth International Airport and downtown Fort Worth.

"Grapevine is focused on new developments that align with our city’s values and are true to our vision," said Grapevine City Manager Bruno Rumbelow. "TEXRail and Grapevine Main are a unique opportunity to embrace our railroad past and blend it perfectly with modern, upscale amenities and the future needs of citizens and visitors alike."