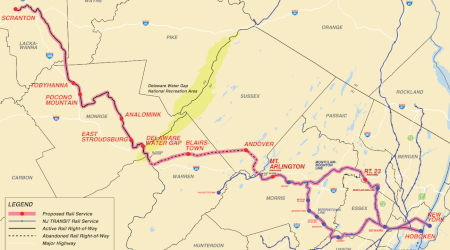 The Pennsylvania Northeast Regional Railroad Authority (PNRRA) this week was awarded a $400,000 state grant for engineering services needed to continue track and structure construction for a passenger-rail restoration project.

New Jersey Transit is now in the construction phase of the Lackawanna Cut-Off project between Port Morris and Andover, New Jersey.

“The remaining 21 miles in New Jersey and Pennsylvania will require state and federal funding to complete the full restoration of the famed Lackawanna Cut-Off trackage and complete the through route which will be instrumental in taking cars and congestion off of Interstate 80 in New Jersey and Pennsylvania, especially during peak travel periods,”said PNRRA President Larry Malski.

The $400,000 is in addition to $300,000 in federal funding the PNRRA received from the Appalachian Regional Commission. That grant is being used to fund engineering costs as part of the next phase of construction.