The Ohio Department of Transportation (ODOT) this week is hosting a series of open houses to share the results of studies evaluating feasible alternatives for a commuter-rail line in the Greater Cincinnati area.

Known as Oasis Rail Transit, the 17.1-mile line would run between Cincinnati's Riverfront Transit Center and Interstate 275 in Milford. Much of route's alignment would use publicly owned rail right-of-way and could use existing freight lines. In other places, new tracks would be built to complete the necessary connections, ODOT officials said in a press release.

The department will hold three open houses on Feb. 24 and 25.

During previous ODOT community meetings, the public previewed information on the line's proposed technology, operation schedules, station locations, ridership and costs. That information has been updated based on current information and public input, department officials said.

ODOT now is inviting public review and feedback on the results, which will be documented as part of this phase of study.

The Oasis Rail Transit project is a core component of the Eastern Corridor Program, which calls for integrated, multimodal transportation investments between downtown Cincinnati and Clermont County, ODOT officials said. 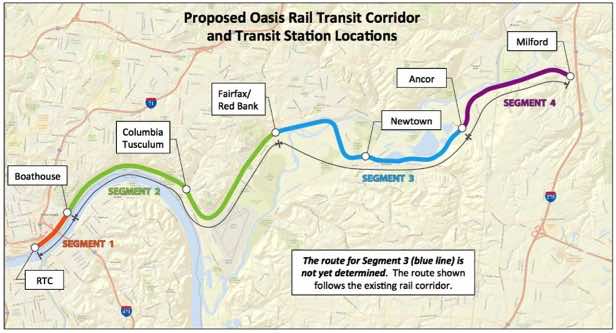