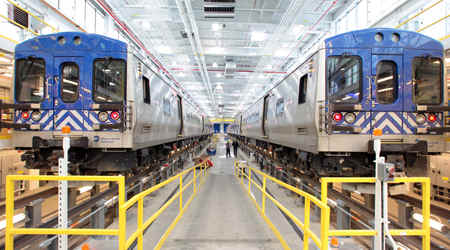 The Metropolitan Transportation Authority (MTA) has approved a contract with Skanska-ECCO for the final phase of rebuilding MTA Metro-North Railroad's Croton-Harmon Shops and Yard complex in Croton-on-Hudson, New York.

The final stage involves completing demolition and replacement of the main shop, where Metro-North previously performed most of its train maintenance. Slated to wrap up in 2022, the work will make room for a new electric car shop and support shop facility.

The electric car shop will provide an improved site for crews to perform preventative maintenance on Metro-North's electric fleet, Metro-North officials said in a press release.

Built in the early 1900s, the 100-acre Croton-Harmon Shops are the center of the railroad's maintenance activities. At the shop, crews service, repair and maintain the Metro-North's fleet of electric cars, coaches and locomotives that serve all three east-of-Hudson lines.

The facility also will become the first wheel truing facility in North America that can smooth four wheels at the same time, Metro-North officials said.

The railroad has nearly completed construction of a consist shop that will be large enough for an entire train to enter the facility for repair without having to uncouple and recouple cars.

To expedite the project, MTA awarded Skanska-ECCO a design-build contract. The contract's financial value was not revealed in the press release.

"It's impossible to operate the railroad safely and efficiently without a well-maintained fleet," said Catherine Rinaldi, Metro-North's president. "The Croton-Harmon Shops and Yard Replacement project brings an antiquated facility into the 21st century, ensuring we continue to provide the best possible service to our customers for generations to come."