MBTA's fiscal control board to serve for two more years 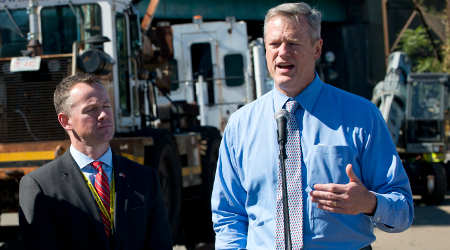 Established in 2015, the board is continuing its leadership under an authorizing statute, according to a press release issued by Baker's office. The board's initial three-year term would have expired June 2018.

"In the last two years, the FMCB has made measured and substantial progress on reform and investments in our public transit system to deliver a more reliable service for riders," Baker said. "As the MBTA nears the hiring of a permanent CEO and GM who can cement its turnaround, we are confident the [agency] will have the knowledge, skills and resources to continue making successful improvements to service and performance."

The governor recommended in February that the board exercise the two-year extension.

Baker also announced that MBTA Acting General Manager and Chief Administrator Brian Shortsleeve will step down from his positions and join the FMCB, effective July 1. Steve Poftak will temporarily vacate his role as the board's vice chair and serve as the agency's interim GM.

Under the leadership of the FMCB and Shortsleeve, the MBTA has reduced a projected fiscal-year 2018 operating budget deficit of $335 million to $30 million, according to Baker's news release.