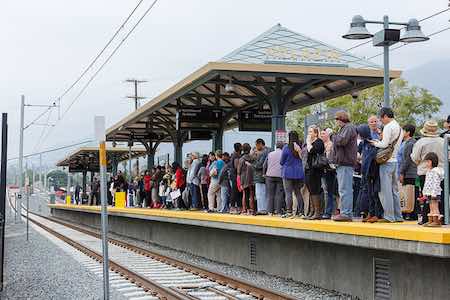 Riders line up at a station in Arcadia, Calif.
Photo: Peter Watkinson/L.A. Metro

The $1 billion, 11.5-mile project extends the Gold Line light-rail route from its current terminus in Pasadena, Calif., to Azusa Pacific University and downtown Azusa. The extension traverses five cities and has six new stations, according to the project's website.

There were at least 20,000 boardings at the new stations during the opening event, Metro officials said in a blog post.

The Pasadena-to-Azusa segment marks the second phase of the Gold Line extension. The first 13.7-mile phase connecting downtown Los Angeles to Pasadena was completed in 2003.

Metro plans to extend the line beyond Azusa with a final 12.3-mile extension running from Glendora to Montclair, Calif.

As with the second phase, the Montclair extension will be built along the former Atchison, Topeka and Santa Fe right-of-way, which Metro purchased for the project in the early 1990s.

Funding for the final segment has not yet been secured.