Higher-speed rail route in Michigan would be profitable, study finds

Establishing 110 mph passenger-rail service between Detroit and Holland, Mich., could generate more than $12 million in annual profit, according to a recent study prepared on behalf of the Michigan Environmental Council (MEC).

Providing 110 mph service would require greater capital investment, but would yield higher ridership that would allow the service to recover its operating costs, Michigan Environmental Council (MEC) officials said in a press release. The service could generate $12 million in yearly profit on a route through Ann Arbor and Howell, Mich.

Establishing basic 79 mph service on the 186-mile route through Ann Arbor and Howell would require an annual subsidy of about $3 million and an upfront investment of $130 million, MEC officials said, noting that the amount is comparable to the cost of building 13 miles of interstate highway.

Concurrent with the study, the MEC and the Michigan Association of Railroad Passengers collected feedback on the "Coast-to-Coast" project from 575 Michigan residents online and in person.

"Business leaders, economic developers, local governments and college students have all told us they support the idea of knitting together our cities, cultural centers and other institutions by rail," said Liz Treutel Callin, transportation policy associate for the MEC. "Now we have an in-depth report showing that the Coast-to-Coast passenger rail project is one worth pursuing, with significant potential benefits for Michigan's economy and quality of life."

The next step toward establishing passenger-rail service is a full feasibility study to include environmental impact analyses, an implementation plan and a review of public-private partnership options, MEC officials said. 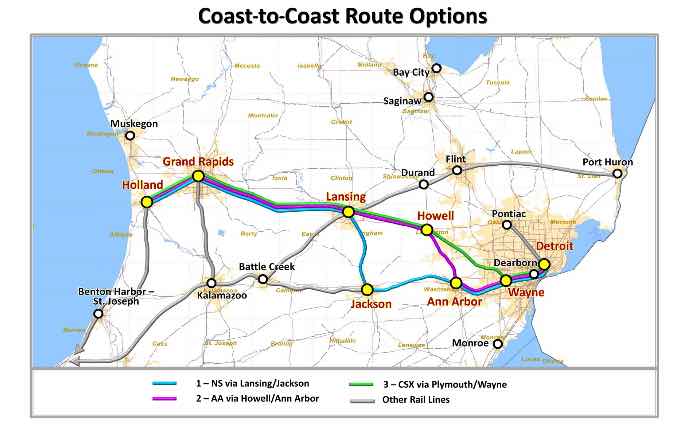