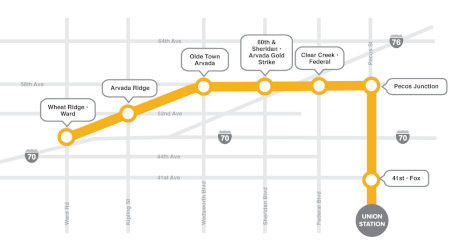 The 11-mile, eight-station electric commuter-rail line will connect passengers from the western-most station to Union Station in downtown Denver in 25 minutes, according to an RTD press release.

The two-car trains on the G Line will include 91 seats in each car, two ADA-compliant seating areas, luggage racks, overhead carry-on storage areas, and space for skis and bikes.

The project is part of RTD’s 2004 voter-approved FasTracks program to expand transit across the Denver metro region.

The G Line, which will be operated by Denver Transit Partners, will open with quiet zones in place along the entire line.