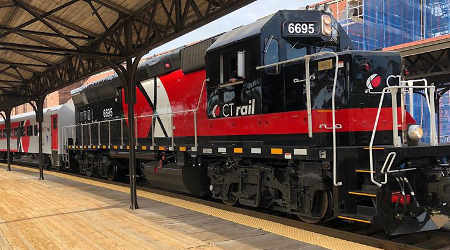 The Connecticut Department of Transportation (CTDOT) has completed and opened a second track on the CTrail Hartford Line between Hartford and Windsor.

The work marks the completion of 4 miles of track construction as part of the New Haven-Hartford-Springfield (NHHS) rail program, although some follow-up construction activity will occur through mid-November.

The second track will enable trains north of Hartford to pass each other quickly and efficiently, CTDOT officials said in a press release. It also adds rail capacity that will benefit both passenger and freight service to help cut down on potential delays.

"This is another milestone for the NHHS Rail Program and the Hartford Line service," said CTDOT Commissioner James Redeker. "It also represents another step closer toward the 2030 vision of expanded rail passenger service in New England."

Future construction phases will include another second track between Windsor and Enfield. That track, which currently is under design, would connect with the existing double track between Enfield and Springfield, Massachusetts.

The department continues to seek funds to build those stations and the second track between Windsor and Enfield, officials said.