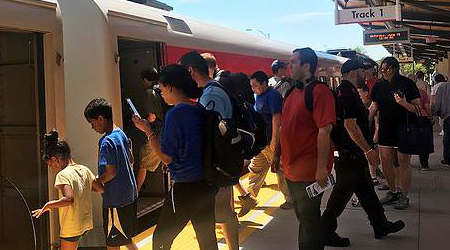 The "overwhelming demand" prompted the state to provide additional service on June 17, according to a press release issued by Malloy's office. Amtrak also added an extra afternoon train out of Springfield, Massachusetts, to accommodate riders, the Hartford Courant reported.

Ridership on the line's second day of service then exceeded capacity, according to the Hartford Line's Twitter account.

"We built this rail line because of the economic development potential that it can attract, and the thousands of people who rode the line on [June 16] shows the business community exactly what they can expect to see if they relocate to any area near the Hartford Line corridor," Malloy said.

Rides were free throughout the line's opening weekend.

Earlier this month, the Connecticut Department of Transportation began test runs along the route.