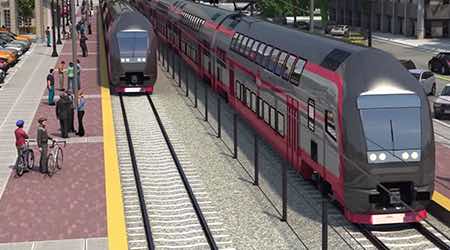 Caltrain has reached an agreement with its contractors to extend to June 30 the deadline for the start of construction on its electrification project.

The move will preserve the project's contracts while the railroad awaits a decision from the Federal Transit Administration (FTA) about the execution of a $647 million funding agreement, Caltrain officials said in a press release.

The original deadline was March 1. The extension likely will require Caltrain to use up to $20 million in project contingency funds that otherwise would have been available for future construction-related expenses, according to the railroad.

"The sooner the grant agreement is executed, the smaller the impact will be to the project’s contingency," Caltrain officials said.

Earlier this month, the FTA decided to halt the funding agreement until President Donald Trump develops his fiscal-year 2018 budget.

Since 2009, the railroad has been working with the FTA to ensure that the project meets all statutory and regulatory requirements of the "Core Capacity" competitive grant program. The project received high ratings throughout the evaluation, Caltrain officials said.

"Every project that has achieved these milestones has received an executed Full Funding Grant Agreement and we don't expect that this project will be any different," said Caltrain Executive Director Jim Hartnett.

Additional extensions may not be possible, Caltrain officials said, noting that contractors have agreed to delay construction for the maximum amount of time possible.

"Delaying a decision on federal funding beyond June 30 will be the same as rejecting the grant," Hartnett added.