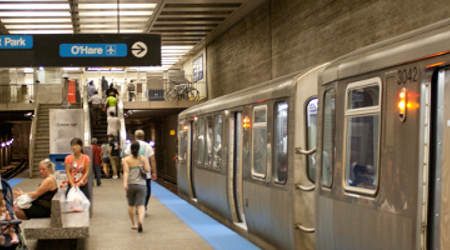 The company will perform a range of improvements at the Jefferson Park and Belmont stations. The enhancements include new signage, interior and exterior painting, new LED lighting, and replacement of the bus terminal concrete and rail station platform surfaces.

The work is aimed at improving safety, security and comfort for rail and bus riders, CTA officials said in a press release.

"The improvements we make under this project work will not only benefit our riders, but will also further enhance and add to the aesthetics of the communities they serve," said said CTA President Dorval Carter Jr.

Both improvement projects are slated to begin early next year. The Belmont Station work is slated to be completed in late 2018, with the Jefferson Park Station project expected to wrap up in 2019.

The stations are being upgraded as part of Chicago Mayor Rahm Emanuel's "Your New Blue" project to improve and upgrade the O'Hare branch of the Blue Line. That larger project was announced in 2013.

Meanwhile, the CTA's board also awarded a $25.9 million construction contract to Walsh Construction Co. II for a project to improve the Garfield Station on the CTA's Green Line.

That project calls for upgrades to the active station house that opened in 2001 and to the surrounding ground-level. Work will include restoration of the station house facade and terra cotta exterior, as well as installation of an escalator on the south side and mid-platform exit stairs.

CTA received $25 million in Transportation Investment Generating Economic Recovery (TIGER) funding for the $50 million Garfield Station project. A mix of CTA and local funds will cover the remainder of the project's costs.