Brightline prepares for next trainset deliveries 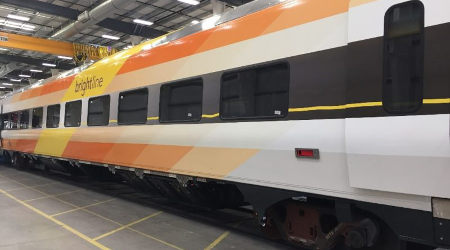 In a few weeks, two completed trainsets built for Brightline's new passenger-rail service will be shipped together from the Siemens manufacturing plant in Sacramento, Calif., to their Florida destination, railroad officials announced late last week.

The shipment marks the first time that two trains will be shipped at the same time, said Brightline officials in a post on the railroad's website. Brightline's trainsets are designated by color: BrightBlue and BrightPink arrived in Florida earlier this year and are housed at the railroad's operations center in West Palm Beach.

"We're excited to welcome our next two trainsets together," said Tom Rutkowski, Brightline's chief mechanical officer. "BrightGreen is currently complete and Siemens is putting the finishing touches on BrightOrange."

Each trainset consists of two diesel-electric locomotives, one on each end of four passenger coaches. The locomotives are compliant with the U.S. Environmental Protection Agency's Tier 4 standards.