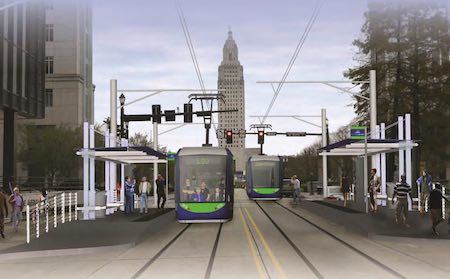 A rendering of the Baton Route streetcar
Source: tramlinkbr.com

The city of Baton Rouge, La., now can move into the project development and design phase for a 3-mile tram system after a federal review found the project would have no significant environmental impacts.

If the city doesn't begin building by that time or if the selected route is changed, the FTA may require supplemental environmental documentation, according to the agency's letter of approval.

The project also would include the construction of a new 20,000-square-foot operations and maintenance facility to store, maintain and service the tram vehicles.