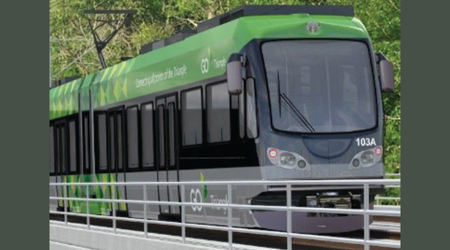 A new feasibility study by the GoTriangle transit agency estimates a commuter-rail system operating 40 trains each weekday between Garner and Durham, North Carolina, would cost $1.4 billion to $1.8 billion to construct and carry 7,500 to 10,000 riders per day.

The 37-mile commuter-rail line would connect the cities of Raleigh, Cary and Durham, as well as Research Triangle Park. The new study, called the Greater Triangle Commuter Rail Study, is evaluating infrastructure recommendations, cost estimates and ridership projects, according to a post on GoTriangle's website.

The study also indicates that any viable commuter-rail project proposed to run in the existing North Carolina Railroad Co. corridor would require the construction of at least 34 miles of new parallel track depending on the number of new daily trains.

Future analyses — in coordination with North Carolina Railroad and other railroads that operate in the corridor (including Amtrak) — would further refine the capital requirements for adding track, bridges and other infrastructure, agency officials state in the website post.

The study findings will help GoTriangle determine whether the project can or should move to the development phase.

At a meeting last week, Durham County commissioners expressed caution about developing a commuter-rail project in the wake of a failed proposal to develop the Durham-Orange light-rail line, the Raleigh News & Observer reported.

In March 2019, GoTriangle's board canceled the $2.7 billion light-rail project after Duke University declined to sign a cooperative agreement that would have allowed the project to proceed.