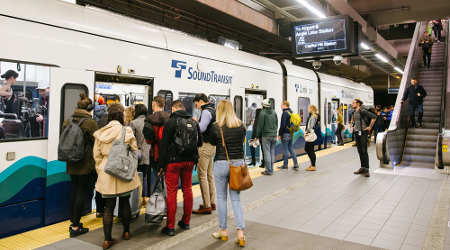 Sound Transit has identified six potential sites in south King County, Washington, for a new operations and maintenance facility (OMF) that would accommodate light-rail expansion in the Puget Sound area.

The agency is seeking public input on the possible sites as part of an environmental impact statement (EIS) scoping process. Comments can be provided online, by mail or email, or at a public open house, which will be held March 12 and 20. Online and written comments will be accepted until April 1.

Anticipated to open in 2026, the OMF would be used to clean, maintain and store cars. To keep its entire light-rail system functioning, the agency needs to strategically locate such facilities that can operate 24/7, Sound Transit officials said in a press release.

Sound Transit currently operates one OMF in Seattle while another facility is under construction in Bellevue. An OMF also is needed in the North Corridor, agency officials said.

The System Access Fund provides $100 million for projects that promote multimodal access to transit, such as protected bike lanes, shared use paths, and new pickup and drop-off areas. To be awarded by the agency's board in summer, the first round of funds will target up to $10 million in each of Sound Transit's five geographic subareas.

"The System Access Fund underscores [our] commitment to removing barriers for potential riders who would like to take advantage of the high-capacity transit system," said Sound Transit Chief Executive Officer Peter Rogoff in a press release.

Cities, counties and transit agencies are eligible to submit applications by April 12 for the first round of funds. Sound Transit will notify entities by March 18 if their project qualifies for an application.