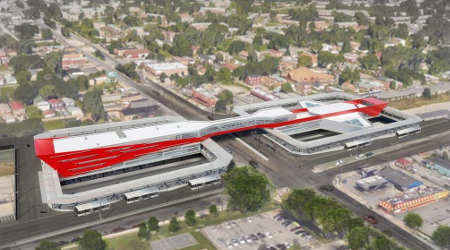 The Chicago Transit Authority (CTA) has installed a steel pedestrian bridge connecting the North and South terminals at the 95th/Dan Ryan Station on the city's South Side.

On Nov. 18, workers used two large cranes to lift the bridge into the air and connect the terminals. The bridge was installed in three large sections, with each portion weighing more than 73,000 pounds, according to a CTA press release.

In April, the agency officially opened the South Terminal at the 95th/Dan Ryan Station. The North Terminal is slated to be completed by year's end.

Built in 1969, the 95th/Dan Ryan Station is one of the CTA's busiest stops, with 24-hour Red Line service and more than 1,000 CTA and Pace bus trips on a typical weekday.