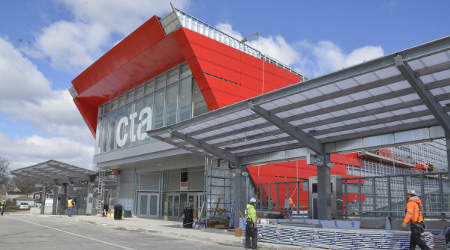 The completion of the terminal marked a milestone in the $280 million project to rebuild the station, which is one of the agency's busiest, CTA officials said in a press release.

The redesigned south terminal is the first of two rail and bus facilities that will replace the 50-year-old 95th Street Station, which serves 20,000 riders each weekday.

The north terminal, which is now under construction, is slated for completion by year's end.

The south terminal was completed after the CTA completely rebuilt the Red Line's South branch in 2013. That $425 million project involved reconstructing the entire 10-mile track structure between the Cermak/Chinatown and 95th Street stations. It also included rehabilitation of eight stations.

Earlier this year, CTA unveiled its preferred alignment for a proposed Red Line extension from the 95th Street station to 130th Street.