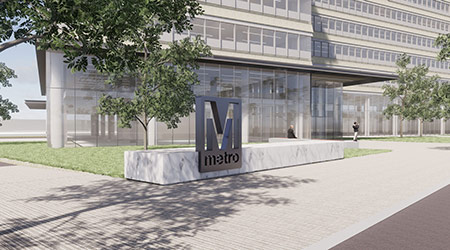 The agency now will seek final board approval to purchase a vacant office building at the plaza as the replacement for its current headquarters, the Jackson Graham Building. WMATA plans to strip the acquired building’s exterior and completely renovate the facility, including new commercial amenities on the ground floor. In addition, the agency might add three floors to create lease space and generate additional revenue, WMATA officials said in a press release.

If the agency’s board approves the building purchase at its Nov. 15 meeting, WMATA could close on the transaction by November’s end. Design and construction is expected to take about two years to complete.

The selection of a headquarters site is the first major step in a broader office consolidation strategy that will save $130 million over the next 20 years, agency officials said. WMATA plans to downsize in the region from 10 office buildings to seven. The plaza building is about 30 percent smaller than the current headquarters, so WMATA expects to shift some office functions to facilities in Maryland and Virginia as part of the consolidation plan.

Home to more than 1,300 employees and contractors, the current headquarters was built in 1974 and does not meet current accessibility requirements or modern safety standards, agency officials said. WMATA plans to begin the sale process for the Jackson Graham Building in spring 2019.

“Moving our headquarters to L'Enfant Plaza will make us even more accessible to our customers, create a modern and vibrant office space that allows us to attract and retain topflight talent, and generate revenue to support transit service,” said Paul Wiedefeld, the agency’s general manager and chief executive officer.