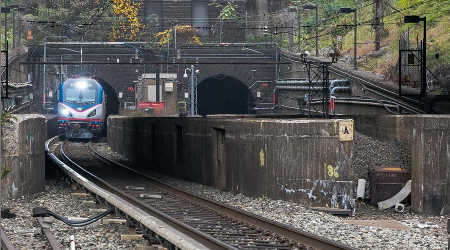 The governors of New York and New Jersey on Wednesday pledged to fund 100 percent of their states' share of the new Gateway Hudson Tunnel.

The tunnel is an essential part of the Northeast Corridor that connects New York and New Jersey and is the nation's most critical major infrastructure project, according to a joint press release issued by the governors' offices.

Together, the three funding commitments will cover 100 percent of the local share for the most urgent, time sensitive elements of the project: the construction of a new tunnel and the Hudson Yards concrete casing, which total $11.1 billion of the $12.7 billion construction cost.

The commitments mark a "pivotal milestone" in the Gateway Tunnel project's construction, and builds on the start of construction earlier this year on the Portal North Bridge project, said New Jersey Gov. Chris Christie.

"It positions the project to immediately compete for federal Capital Investment Grant funds," said Christie. "The Hudson Tunnel project is critical to the regional and national economy and protects against a potentially disastrous scenario of a closure of one of the two tubes of the existing North River Tunnel. Together, with the rehabilitation of the existing tunnel, this project will result in the crucial Northeast Corridor having four tracks between New Jersey and New York under the Hudson River, allowing for increased ridership in the future."

The Hudson River Tunnel project is critical to the regional and national economy, according to New York, New Jersey and Amtrak officials. The North River Tunnel, which opened in 1910 and is the only intercity passenger-rail crossing into New York City from New Jersey, was severally damaged by Hurricane Sandy in October 2012.

"New York State is stepping up to fund its share of the financial commitment as we rebuild our infrastructure all across the state," Cuomo said. "Now the federal government must fulfill its commitment to fund the other half and make this urgent, long-overdue project a reality."

Earlier this year, Amtrak unveiled a new media campaign, "Ready to Build," to highlight the importance of several high-priority Amtrak infrastructure projects in need of funding. The Gateway Tunnel project is among them. Learn more about Amtrak's campaign by reading this feature in the December issue of Progressive Railroading.