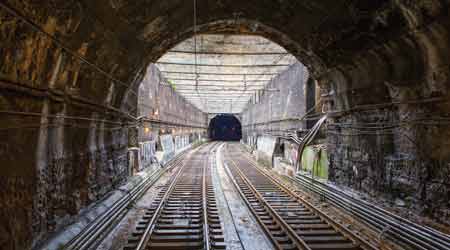 On Oct. 13, Amtrak and New Jersey officials hosted a groundbreaking ceremony for the Portal North Bridge project, a $1.5 billion effort to replace the century-old, double-track swing-span bridge that carries thousands of rail commuters daily from New Jersey into Manhattan. For Amtrak, the ceremony was a milestone. It marked the start of construction on one of its major projects designed to improve the national passenger railroad’s deteriorating infrastructure along the highly trafficked Northeast Corridor (NEC). Replacing the Portal North Bridge is one component of Amtrak’s Gateway program, a comprehensive plan to build, repair and expand the NEC passenger-rail network between New York and New Jersey.

The Portal North Bridge replacement also is one of five projects that Amtrak recently identified as high-priority capital investments that are needed now to bolster existing rail service along the corridor, as well as lay the groundwork for launching new higher-speed service in 2021.

Since October, Amtrak has been promoting those investments in its new "Ready to Build" campaign, which features a series of short videos that showcase the projects, most of which focus on the NEC. The fifth project calls for investing in Amtrak’s five busiest stations, four of which are located in the Northeast.

The NEC — which extends from Washington, D.C., to Boston — accommodates 750,000 Amtrak and commuter-railroad trips daily. It carries 240 million intercity and commuter passengers annually — and that number is growing. However, current demand for passenger-rail service is outpacing investment, which has led to a $38 billion backlog in deferred capital expenditures, Amtrak execs say.

That lack of investment poses risks to Amtrak's ability to provide reliable service now and expand it in the future, they believe.

While the campaign attempts to explain why the projects — which could cost as much as $40 billion — are needed to shore up Amtrak service, it also aims to educate federal, state and local stakeholders as to why the projects are important to the nation’s economy.

"The Northeast Corridor is a central artery for the greater Northeast, which generates 20 percent of U.S. gross domestic product and is one of the country's principal economic engines," said Amtrak co-Chief Executive Officer Wick Moorman said in a statement announcing the campaign. "These projects are critical to keeping people, the economy and the nation moving forward."

The railroad, and state and federal government agencies have begun regulatory reviews of the multi-year projects identified in the campaign, which total $21 billion in state-of-good repair costs and an additional $15 billion to $19 billion for the five major Amtrak stations, Leeds said.

Once funding sources for the projects are identified and secured, Amtrak can finalize design and begin construction, she added.

What follows is a summary of the Ready to Build projects based on information provided by the campaign and other Amtrak sources.

The existing bridge is a two-track moveable swing-span structure located between Kearny and Secaucus,

New Jersey. It is a critical link on the corridor for New Jersey and intercity commuters heading into New York Penn Station.

Built in 1907, the bridge is a major bottleneck and source of delays for the nearly 474 Amtrak and New Jersey Transit trains that use it daily to travel over the Hackensack River east of Newark. Described by some transportation experts as the "Achilles heel of the NEC," the bridge causes rail traffic to stop when it rotates to open for marine traffic. The structure’s aging mechanical and electrical components sometimes malfunction during the rotation, which causes further traffic delays.

"Every time we open the portal bridge, we think about what would happen if it fails, and what the backup plan would be," Steve Young, Amtrak deputy general manager of operations East, says in one of the Ready to Build videos. "If it fails, there are no tracks in or out of New York." Construction of a new bridge will allow trains to travel over the structure at a higher rate of speed. Moreover, the new Portal North will be a fixed-span structure built tall enough for marine traffic to travel underneath without the need to open and close the bridge.

The project has been fully designed and permits have been granted. Early construction that began in summer included the realignment of a 138kV transmission pole, the installation of fiber optic cable poles, and construction of a finger pier, a steel structure over a utility water main and a retaining wall west of the Frank R. Lautenberg Station at Secaucus Junction. That work was funded by a Transportation Investment Generating Economic Recovery grant to NJ Transit.

Amtrak, NJ Transit and the Port Authority of New York and New Jersey have agreed to fund half of the main project's $1.5 billion cost. In July 2016, the project was accepted into the Federal Transit Administration's Capital Investment Grant Project Development pipeline. Primary construction can start as soon as the federal financial commitment is in place, according to Amtrak.

Also part of the Gateway program, this project calls for designing and constructing a new tunnel under the Hudson River, and rehabbing and modernizing the 106-year-old North River Tunnel, which currently accommodates two tracks under the river between New York Penn Station in Manhattan and New Jersey.

Not only is the existing tunnel’s infrastructure antiquated, the tunnel was severely damaged during Hurricane Sandy in October 2012. Although Amtrak claims the tunnel is safe for use, emergency maintenance continues to interrupt service. A permanent fix can occur only through construction of a new tunnel — a belief Amtrak executives have asserted over the past several years. 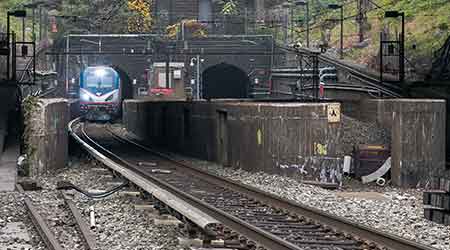 The Hudson Tunnel project calls for construction of a new tunnel under the Hudson River and rehabbing the existing North River Tunnel (shown.)
Amtrak

In July, the Federal Railroad Administration (FRA) issued a draft environmental impact statement (DEIS) for the $12.9 billion project, which would include $1.8 billion to rehab the existing structure. The DEIS' preferred alternative calls for building two new rail tubes in a single tunnel beneath the Hudson River, as well refurbishing the existing structures. The new tubes would be designed to maintain the current level of train service while the North River tubes are removed from service one at a time for rehabilitation. The FRA expects to issue a final environmental impact statement in spring 2018. Funding for the entire project has yet to be finalized, although Amtrak and the port authority are conducting preliminary engineering.

This $5 billion project calls for replacing the existing two-track tunnel that runs beneath Baltimore between Penn Station and the West Baltimore Maryland Area Regional Commuter (MARC) Station. Amtrak and MARC trains use the tunnel. Built just after the Civil War, the B&P Tunnel is 1.4 miles long. Trains operating on four tracks approaching the tunnel must cut their speed to 30 mph before traveling on the B&P's two-track system. The tight tunnel’s curved shape also requires trains to slow down, which further limits train traffic.

As proposed, the new four-tube tunnel would allow for faster trip times and more reliable service, according to Amtrak.

In spring, the FRA issued a record of decision on the proposed project’s environmental impact statement. The agency selected the preferred alternative and three ventilation facilities, one each at the North and South portals and an intermediate ventilation facility site at 900-940 West North Avenue. However, the B&P replacement project is not funded for final design and construction.

Built in 1906, the 4,000-foot-long, two-track bridge crosses the Susquehanna River between the city of Havre de Grace and the town of Perryville, Maryland. Amtrak, MARC and Norfolk Southern Railway trains use the structure, which is the longest moveable bridge on the NEC. Because the bridge lacks modern mechanisms, a large crew is required to operate the swing span every time a tall vessel passes underneath. The process holds up rail traffic, causing delays. 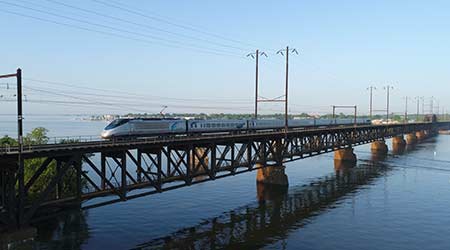 Besides serving MARC and Amtrak trains, the bridge is a critical connection for freight trains transporting goods to the ports of Baltimore and Wilmington.

For example, the bridge is a vital link for NS trains traveling along the corridor to serve customers in Maryland and Delaware, according to NS Resident Vice President Rudy Husband. NS operates eight to 10 trains over the bridge daily, with many carrying farm-equipment products to the Port of Baltimore for export.

"If the Susquehanna Bridge was disabled for an extended period of time, you would see an immediate effect on the national economy," says Husband in a Ready to Build campaign video. The $1.7 billion project to replace the aging structure calls for two new fixed, high-level bridges with a total of four tracks, which would double existing train capacity. One bridge would be designed to serve trains operating at speeds of up to 160 mph.

In June, the FRA released a "finding of no significant impact" as part of the project's environmental impact statement. The federally funded study included preliminary engineering and 30 percent design of the preferred alternative. Funding for the remainder of the project is not yet lined up. 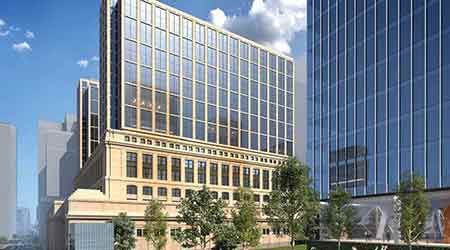 A conceptual design of what the redevelopment of Chicago Union Station and neighboring Amtrak-owned properties might look like in downtown Chicago.
Goettsch Partners

Combined, the station projects are expected to cost $15 billion to $19 billion. Proposals for each are in various stages of development. Amtrak and local community leaders are pursuing public-private partnerships with businesses interested in developing the real estate around the stations.

For example, Amtrak and Chicago officials in May announced a team led by Riverside Investment & Development Co. will be the master developer for the $1 billion redevelopment of Chicago Union Station and Amtrak-owned property in the area.

As Amtrak's Ready to Build campaign suggests, the railroad's other critical infrastructure projects will require the support and cooperation of all of Amtrak’s public- and private-sector "partners" that use Amtrak's NEC assets. Those partners include eight states, the District of Columbia, eight commuter railroads and multiple freight operators.

"To successfully modernize our infrastructure, all these stakeholders must work closely together to prioritize, phase and fund a shared vision of the Northeast Corridor's future," said Amtrak's Leeds. "The stakeholders have already made significant progress together during the past five years, while acknowledging there is much work ahead."