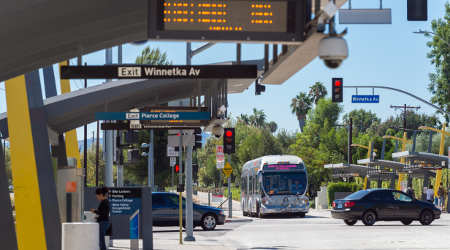 The Los Angeles County Metropolitan Transportation Authority's (Metro) board has approved a staff recommendation to study proposed safety improvements that could lead to converting the Orange bus-rapid-transit (BRT) line to a light-rail line.

The study will examine the possible installation of railroad-style crossing gates at intersections along the Orange Line BRT route. The agency also will examine other possible grade separations at key locations along the 18-mile bus line, which has its own right of way.

The proposed improvements would be designed to allow for future conversion of the bus line to light rail, Metro officials said in a press release.

Agency staff also have recommended building an elevated busway bridge between Van Nuys and Sepulveda boulevards on the Orange Line route. Those streets are two of the San Fernando Valley's most congested thoroughfares, Metro officials said.

Metro has set aside $286 million for the Orange Line improvements. That money comes from the Measure M sales tax initiative that L.A. County voters approved in 2016.

In March, Metro received an unsolicited proposal to fast-track the Orange Line's conversion to light rail.