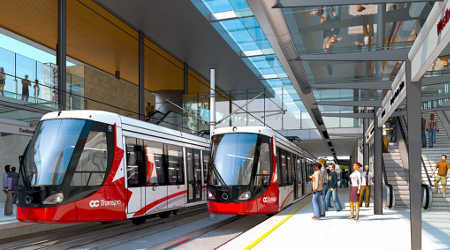 Expected to cost CA$3.6 billion total, the project's next phase involves building 23 miles of rail and 23 new stations. The second phase calls for extending both the Confederation and Trillium lines.

When construction is completed in 2023, 70 percent of Ottawa residents will live within 3 miles of light-rail service, according to a press release issued by Trudeau's office.

The funding is in addition to the more than CA$67 million the federal government previously committed to the project. In addition, the province of Ontario has pledged CA$1 billion, while the city of Ottawa will cover the remaining balance.

The confirmed federal and provincial funding enables Ottawa to move forward with the procurement process, including issuing a request for proposals and ordering additional rail cars for the system.

"The expansion of Ottawa's light rail transit system will make it easier for residents and visitors alike to get around and experience everything our capital city has to offer," Trudeau said. "This expansion will help Canadians get to work and back home to their families on time, make our air cleaner, and create good, well-paying middle class jobs."

The first phase of Ottawa's light-rail project, the Confederation Line is slated to open for full service in 2018. Major parts of the line will be complete in time for celebrations planned for Canada's 150th anniversary, according to the project website.