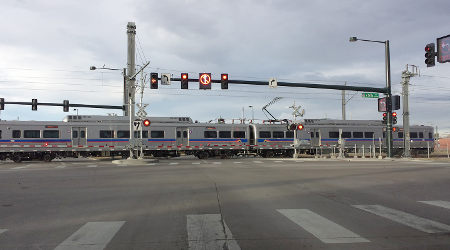 Despite the approvals, the project's contractor has raised concerns about how long it has taken to receive state and federal certification to operate the G Line.

Denver Transit Partners (DTP), the contractor for RTD commuter-rail lines, notified the agency that it is concerned about its "ongoing inability" to receive approval and final certification from the FRA and the CPUC.

The G Line is one of three commuter-rail projects in RTD's Eagle P3 project, which represents the United States' first set of newly built commuter-rail lines to use positive train control (PTC), RTD officials said in a press release.

In the notice, DTP claimed that there was a change in law governing certain FRA and CPUC approvals.

"The claim could impact the allocation of certain costs, the schedule for revenue service and payments to DTP for commuter-rail operations," RTD officials said.

However, neither law changed the "technical regulatory requirements for PTC systems," said FRA spokesman Marc Willis in an email.

Willis added that the FRA is aware of DTP's notice and that the issue is a "local matter between RTD and DTP."

RTD is reviewing DTP's notice and will provide more information as it becomes available. The agency will continue to partner with DTP to complete testing and eventually open the G Line, RTD officials said in the news release.

RTD issued the release hours after the CPUC approved the resumption of G Line testing, The Denver Post reported yesterday.

Although RTD is waiting to receive the decision in writing, G Line testing could start in a week, according to the newspaper.

The line has been delayed for more than half a year as DTP works to fix a software issue at crossings along the B and A lines, The Post reported. All three commuter-rail lines will use the same crossing technology.