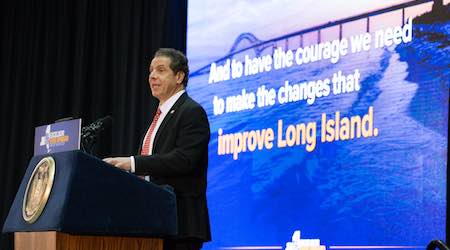 The proposal calls for "major enhancements" to the stations, including new platform waiting areas, new facilities and improved signage, according to a press release issued by Cuomo's office. The plan also provides funding for adding Wi-Fi, charging stations and public art.

The plan would provide $20 million to add a stop on the LIRR's Ronkonkoma Branch at Brookhaven National Laboratory in Upton, N.Y. Another $20 million would go toward developing a new terminal at the airport to provide direct service to the LIRR.

The LIRR projects were part of Cuomo's $160 million plan for various improvements on Long Island.

"These major, transformative investments in Long Island's core infrastructure invest in the future resiliency and strength of the region," Cuomo said. "Enhanced LIRR stations will connect further than they ever have before."