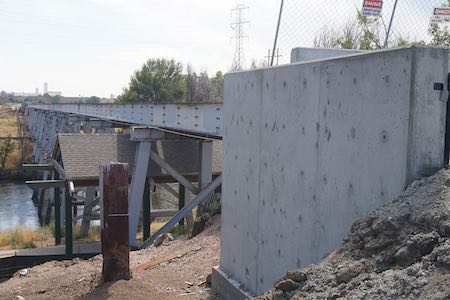 During the summer of 2015, crews removed the old rail from the bridge, but "in the near future," they'll begin installing the duct bank for train control, RTD officials said in a post on the agency's website.

The duct bank is part of the train control infrastructure that serves as a pathway for the wire and fiber optic cables to travel between equipment signals and gates, according to the agency.

After the bank is installed, another backfill will take place before the installation of track panels, ties and hand rails.

In summer 2016, crews sandblasted the existing abutment and steel beams, and then applied a galvanized primer and several coats of paint to the bridge. Later, footings and abutment walls were formed, and drainage pipes were installed and back-filled.

By the end of the process, the bridge will be transformed and replaced with a new commuter-rail bridge for North Metro trains.

Trains will cross the bridge three times a day on each run along the line, RTD officials said.