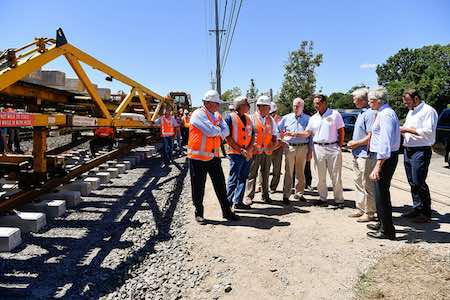 The LIRR's double-track project calls for adding 13 miles of parallel track along the railroad's Ronkonoma Branch, which serves more than 48,000 riders each weekday. The project is expected to "dramatically reduce delays" on the LIRR's system and enable more off-peak service in both directions, Cuomo's release said.

With only one track along most of the Ronkonkoma Branch, LIRR can operate a limited number of trains and lacks "operational flexibility" in the event of a disruption.

"Adding a second track to the Ronkonkoma Branch is a project has been talked about for decades, but was never set into motion," Cuomo said. "By pairing innovative equipment with our strategy of design-build construction, we are accelerating the pace of these types of critical infrastructure projects to improve Long Island commutes and strengthen the region's economy."

Funding for the $387.2 million project has been secured by Cuomo and the New York State Legislature.

Meanwhile, Cuomo announced the systemwide implementation of the MTA eTix mobile ticketing app on LIRR and MTA Metro-North Railroad. The app enables riders to board using their smartphones instead of paper tickets, as well as check schedules and see train service status.