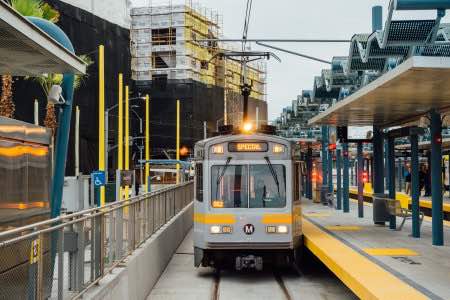 The 6.6-mile route runs from Santa Monica to Culver City, Calif., and includes seven stations. The extension is the second rail project funded by L.A. County's Measure R sales tax initiative to open this year; the Gold Line extension to Azusa, Calif., — which opened in March — was the first.

Weekday ridership on the Expo Line's new extension is projected to total 18,000 to 20,000 boardings after the first year of service, Metro officials said in a press release. The travel time to downtown L.A. to downtown Santa Monica is 48 minutes.

The project also includes a $103.5 million light-rail vehicle maintenance yard in Santa Monica. The 14-acre facility can house up to 48 train cars and is staffed around the clock by nearly 200 Metro employees, agency officials said.

Exposition Construction Authority crews broke ground on the extension in 2011, with heavy construction beginning in 2012. In February, the authority turned the project over to Metro, which will operate the line.

"The opening of the Expo Line extension today is a great reminder that we have come a long way in a short time," said Metro Chief Executive Officer Phil Washington. "But we still have more to do with easing everyday congestion. We will continue to strive to deliver our investments on time and on budget for the transportation network that Los Angeles County deserves."