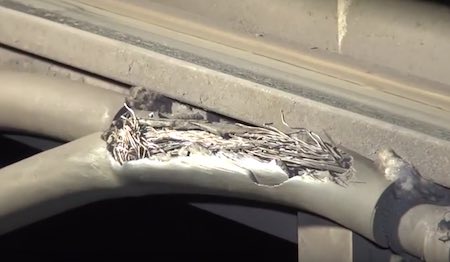 All but four of the defective locations have been remedied as of last night, WMATA officials said in a press release. Repairs at the remaining locations are underway.

To perform the inspections, the agency took the unprecedented step of shutting down the entire Metrorail system for 29 hours. The closure began Wednesday at midnight and continued until 5 a.m. today.

Investigators are reviewing the history of the damaged boots and cables and will share their findings with the Federal Transit Administration and the National Transportation Safety Board. Investigators also will review inspection records, age of materials and maintenance records to identify any procedures that were not followed or standards that weren't met, WMATA officials said.

The suspension of Metrorail service followed an electrical fire involving a cable in the the tunnel near McPherson Square Station on Monday. No injuries were reported, but conditions of the fire were "disturbingly similar" to the January 2015 smoke incident in a tunnel near the L'Enfant Plaza Station, WMATA General Manager and Chief Executive Officer Paul Wiedefeld said.