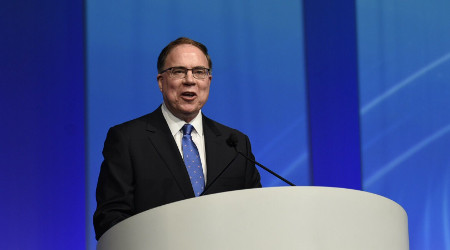 It's been a year of mixed messages for public transit leaders. For instance, although President Donald Trump has pledged to unveil a $1 trillion infrastructure package, he's also proposed deep cuts to Amtrak's services and transit grant programs.

Looking into the new year, things likely won't be getting any easier for transit execs in 2018. Funding remains a perennial issue, and ride-sharing companies like Lyft and Uber pose an ongoing threat to ridership.

Still, American Public Transportation Association (APTA) Senior Adviser Richard White believes 2018 holds a wealth of opportunities for transit agencies. For one, agencies can begin exploring collaborative partnerships with ride-sharing services instead of viewing them as competitors.

Below, White shares his thoughts on some other big-picture transit industry issues that likely will be crucial ones in the coming year.

What are some of the biggest challenges transit agencies will face in 2018?

White: We are entering a time of profound transformational change in the public transportation sector, the likes of which we have not experienced since the advent of the automobile more than 100 years ago. Today, the future of public transit is being shaped by non-stop technological advances, the public's shifting preferences and lifestyle choices, and the emergence of new service providers. The challenges are great, but the opportunities are even greater.

Under the best of circumstances, this dual mission would be difficult. What makes it that much more daunting — and urgent — is the unprecedented $95 billion backlog in state of good repair (SOGR)/modernization work needed just to bring our current public transit assets into acceptable condition. This number grows every day and does not include the additional resources to maintain these improvements. This problem grows bigger every year as the annual capital spend for public transportation is only approximately $20 billion, 43 percent of which is federal dollars.

One of the more formidable infrastructure issues facing many public transit agencies today is the statutory requirement to install positive train control (PTC) equipment by the end of 2018. This important safety improvement is underway in rail systems across the country, but there are complex technical and financial obstacles that require considerable time and resources to address.

Another pressing safety issue is the need for 30 states and Puerto Rico to obtain federal certification of their transit-rail State Safety Oversight programs by April 15, 2019. Only three states (Minnesota, Ohio and Utah) have been certified thus far. If a state fails to meet the deadline, the Federal Transit Administration is prohibited by law from awarding any new federal funds to public transportation agencies within the state until certification is achieved.

Aging infrastructure not only impacts safety and security; it also can create service delays that erode public trust as well as ridership numbers. And even a small dip in riders adversely affects revenue, which puts more pressure on transit systems' ability both to modernize and expand service.

A second challenge for public transportation systems in 2018 is the growth of ride-sharing companies. Trends all point to a future with more transportation choices. Communities of every size and character are choosing to create new options for citizens rather than continue to be automobile dependent.

With ride-sharing companies such as Uber now in the transportation mix, the issue of time competitiveness – that is, how fast one can travel from point A to point B – is an increasingly key factor in whether people choose public transit or an alternative travel solution. And there is evidence that public transit ridership has fluctuated in some places where ride sharing is growing in popularity.

Finally, predictable, consistent, long-term funding is the third challenge not just for this year but also into the future. Like roads, bridges and highways, public transportation is supported by local, state, and federal governments. On a national level, fare revenue only pays for about one-third of operating expenses. A report by APTA and the American Association of State Highway and Transportation Officials found that the annual capital investment needed over a six-year period to maintain public transportation service in the United States jumped from $17.7 billion in 2013 to $43 billion in 2015. This is the annual spend amount after assuming that the $95 billion SOGR backlog is addressed. This underscores the importance of a local-state-federal partnership to maintain, modernize and expand public transit in the United States.

Unfortunately, there are several troubling signs on the horizon:

How can transit agencies prepare to take on those challenges?

White: To meet the short-term challenges above, our industry must take the following initiatives: