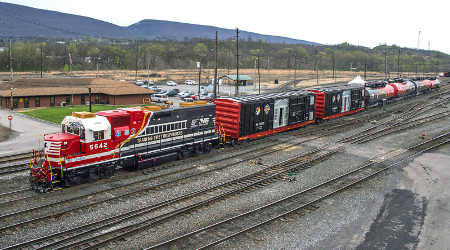 The safety train visited 23 communities across 14 states during its 2017 tour, providing free training to firefighters, law enforcement, emergency management personnel and other first responders, according to an NS press release.

At the train's final stop this year, which was in Greensboro, North Carolina, firefighters participated in advanced tank-car training on possible incidents involving hazardous materials.

"Our safety train is helping Norfolk Southern build and strengthen relationships with first responders across our network," said David Schoendorfer, system manager hazardous materials. "We want them to be equipped with the tools and resources they need to safely do their jobs when responding to potential rail incidents. It's all about helping our communities be prepared and safe."

Rolled out in 2016, the safety train is part of NS' "Operation Awareness and Response" program to connect first responders to training resources. Included in the training is use of AskRail™, a mobile application for first responders that provides real-time data about the materials rail cars are transporting.