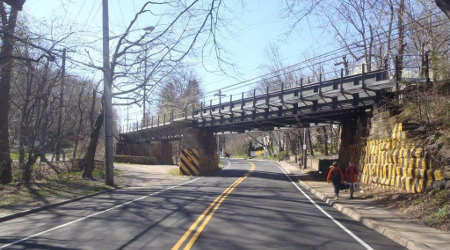 The project calls for raising the bridge clearance by nearly 4 feet to reduce truck strikes. The work also is aimed at improving public safety by improving roadway sight-lines, LIRR officials said in a news release.

Built in 1889, the current bridge has a clearance of 10 feet, 1 inch, and was struck by five over-height trucks in 2017. The new bridge will have a clearance of 14 feet, which is in line with the New York State Department of Transportation's design standards, according to the railroad.

The new bridge was built off site and will be affixed into place after crews decommission and remove the old structure. The work will be performed Oct. 5-9.

The Buckram Road Bridge replacement is one component of LIRR's $6.6 billion modernization program, which includes more than 100 individual projects.

In October 2017, the railroad replaced the Post Avenue Bridge in Westbury, New York. Since then, there have been no over-height truck strikes, Eng noted.