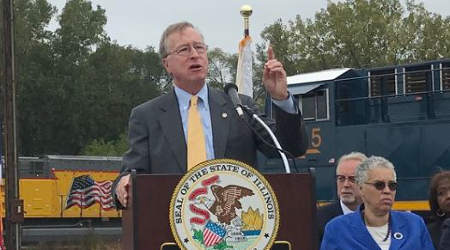 The $474 million project is a linchpin in the Chicago Region Environmental and Transportation Efficiency (CREATE) program, which aims to eliminate a chokepoint at a critical South Side Chicago junction for freight and passenger trains.

When completed in 2025, the project is expected to yield $3.8 billion in new economic benefits by eliminating conflicts and increasing capacity in one of the busiest U.S. rail intersections, according to a press release issued by Rauner's office.

"It is the culmination of years of teamwork and planning by industry and government that will result in more efficient and more productive flows of goods, services and people in our region and in the nation as a whole," said Rauner.

In June, the U.S. Department of Transportation announced the project would receive $132 million under the federal Infrastructure for Rebuilding America (INFRA) discretionary grant program. The federal grant was the final component needed to complete the project's funding package.

According to CREATE, the investment will eliminate 32,000 annual passenger hours of delay from rail travel in the region.

"We are all committed to improving service for both Chicago rail commuters and freight customers nationwide, and this project dramatically moves the ball forward by untangling one of the most congested points in the U.S. rail network," Hamberger said. "America's railroads are here for the long haul, as we continue to advance rail in Chicago."