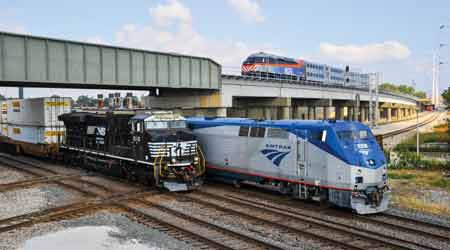 The CREATE program was designed to address one of the most congested points in the U.S. rail network. The three rail projects that will receive grant funds are:
• the Forest Hill flyover, which consists of a new north-south flyover structure that will eliminate conflicts between north-south and east-west train movements at the Forest Hill Junction;
• the 71st Street grade separation that will separate the Western Avenue rail corridor from 71st street; and
• the Argo and Canal junction improvements, which will address the 87th Street chokepoint and increase capacity at Argo yard.

The projects will improve economic vitality through improving several high-priority chokepoints impacting the rail network in Chicago that will increase the movement of goods and people, according to the USDOT grant announcement.

Additionally, the projects' grant proposal addresses the department's funding criteria calling for non-federal funding sources as part of the financial package. In this instance, over 65 percent non-federal funding will be provided through state, local and private dollars. Class Is will contribute $106.3 million, or about 25 percent, toward the total project costs and have pledged to maintain the railroads at no cost to public partners, according to the USDOT.

The CREATE program's grant was among $1.5 billion in funding that the USDOT is awarding under the Nationally Significant Freight and Highway Projects Program, also known as the INFRA program.

"This unique partnership improves service for both Chicagoland rail commuters as well as freight rail customers across the country," said Hamberger in a prepared statement. "CREATE is a poster child for public-private partnerships aimed at increasing efficiency through the heart of the U.S. rail network – Chicago."

Each day, nearly 500 freight trains — with over 37,000 rail cars — and 760 passenger trains pass through the region, according to AAR.