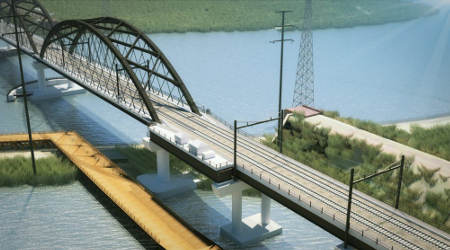 New Jersey has agreed to provide up to $600 million to replace the century-old Portal Bridge over the Hackensack River.

New Jersey Transit's board on Wednesday approved the financing agreement with the New Jersey Economic Development Authority, which will issue bonds to generate the funding. The bonds will be paid back over a 30-year term from the state's transportation trust fund, NJ Transit officials said in a press release.

The state used a similar funding structure in 1999 to build the River LINE light-rail system.

The $1.5 billion bridge replacement project is designed to improve rail transportation between New York City and Newark, New Jersey. It is part of the $30 billion Gateway program to improve rail traffic on the Northeast Corridor.

Built in 1910, the existing Portal Bridge is a two-track swing-type drawbridge that often causes delays due to mechanical failures. The new fixed structure will have clearance that accommodates current and forecasted maritime traffic, which eliminates the need for a moveable span, NJ Transit officials said.

Each day, the Portal Bridge carries about 450 trains per day traveling between Newark, New Jersey and Penn Station New York. Both Amtrak and NJ Transit use the structure.

Replacing the bridge is expected to cost $1.5 billion. State leaders broke ground on the project in October 2017.