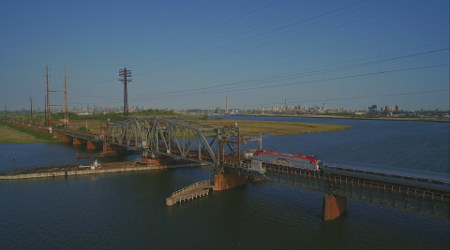 The Portal Bridge is a two-track, 110-year-old swing span structure over the Hackensack River in Kearny and Seacaucus. It has a recent history of malfunctioning that causes rail traffic delays in the corridor.

"This project is vital to our economy and the safety of millions of local commuters and people from around the world who use mass transportation along the Northeast Corridor," Christie said in a press release.

Engineering plans to replace the bridge with a north bridge and a south bridge were completed in 2013 and funded by NJ Transit, Amtrak and the Federal Railroad Administration.

The project involves the construction of two new fixed-span bridges about 53 feet above mean high water, more than double the height of the current bridge. The new structure will allow for higher train speeds and greater train capacity.

Plans to rebuild the Portal South Bridge will come at a later time, according to the press release.