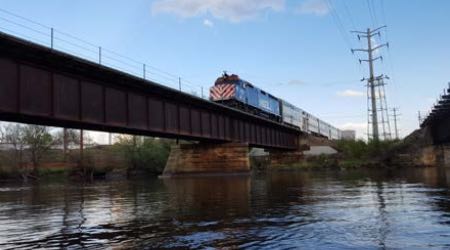 Metra next week will host an open house to gather public comment on the environmental assessment of a project to replace a rail bridge over the Fox River in Elgin, Ill.

The March 2 meeting will provide locals a chance to review project plans, speak with Metra representatives and submit comments.

The bridge, which is about 35 miles from downtown Chicago, carries 54 Metra trains and up to eight Canadian Pacific trains each weekday. Built in 1881, the structure can no longer be "economically repaired," Metra officials said in a press release.

The commuter railroad plans to replace the single-track bridge with a double-track one built to modern design standards. The new structure would help end delay-causing bottlenecks and cut maintenance costs, Metra officials said.

The bridge is the only single-track section on Metra's Milwaukee West Line.

Metra will accept comments on the project's environmental assessment through March 16.

The railroad has received a $14 million federal Transportation Investment Generating Economic Recovery grant toward the $34 million project. Metra will contribute $14 million, while CP will cover the remaining $6 million.

Construction is expected to start in the third quarter and be completed in three years.