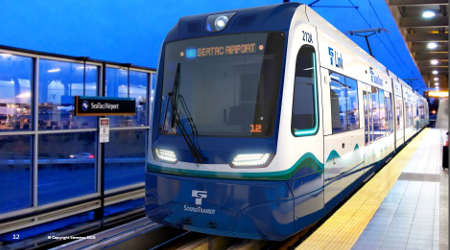 Sound Transit and Siemens have signed a contract for 30 additional light-rail cars.

The order expands on a September 2016 contract for 122 light-rail units. The additional order includes a $2.5 million agreement for Siemens to provide additional spare parts as needed.

The new vehicles include a more spacious interior, extra space for luggage, hooks to store up to four bicycles per unit and an LED lighting system, Siemens officials said in a press release. The company will build the new units at its manufacturing hub in Sacramento, Calif.

The first light-rail car is expected to arrive in early 2019.

"These additional vehicles will ensure that we will be ready in 2024 to launch service on the first two light-rail extensions just adopted by Puget Sound voters in November," said Sound Transit Chief Executive Officer Peter Rogoff, referring to the agency's light-rail extensions to Federal Way and downtown Redmond, Wash.